Mat and i have been busy (as usual) around the house. Last weekend, while it poured rain, we each tackled our own "little" hands-on project.

Ok, so mine was little and Mat's was... not so little.

I refinished a cutlery box (what else would you call those wooden boxes that you keep your good cutlery in with dividers that separate each kind??) and Mat built shelves in the garage.

The shelves?? They are AWESOME! all the junk is off the floor and onto the shelves all neat and tidy like. I'm a very proud wife and even more proud that Mat didn't lose any fingers with the scary saw. I swear - everytime he turned on the saw, i would stop what i was doing, frozen, until i heard it go off without any screaming like "OWWW I JUST CUT OFF MY FINGER!!"

Seriously people, i am a worry wart when it comes to these things and my stomach was in knots the whole time Mat was in the garage building these shelves. Even when i had to leave the house to get something i was worrying to myself that if something DID happen to him, he would be alone...who would drive him to the hospital? Would he know to put pressure on the wound? Would someone pack his finger in ice and bring it to the hospital?? I kid you not, this is what i thought about until i was back home. And then, when i was home, i worried about him cutting off his finger(s) while i was home because, honestly? I would have panicked and fainted and that wouldn't have helped anyone especially Mat and his severed finger....

Clearly you can tell i'm happy that the shelf-building is finished and the saw is put away for a good long while...

I'll post pics soon, but mine isn't complete yet, and i want to show you the before and after.

So you see how much i care about Mat (see above worrying) now i want to do something for him that shows how great of a wife i am. I want to prove my husband WRONG. Because what marriage isn't about who's right??

You see, La Petite Chic is having a giveaway. She's giving away a wii fit AND I WANT IT BADLY. I want it because it would be so cool and i could work out and have fun at the same time, but i mostly want it to prove Mat wrong. I have asked Mat for a wii fit for a while now, and everytime i do, he laughs at me and says "No, because you will never use it. Just like that treadmill we have sitting over there". But internets, i P-R-O-M-I-S-E you that i wiiiiiill use it :)

So keep your fingers crossed for me. If i win it, you can come over and work out with mii :)

Before i go, i want to say a few belated congratulations to Sara on the arrival of her adorable baby boy, Emery who was born on October 5 (one day after my wedding!) and to Lara who just learned she is having twins! Congrats ladies :)
Posted by Roz at 1:44 PM 1 comment:

Well that was fun, wasn't it??

Things seem to have sorted themselves out with the car....or at least my dad did most of the sorting out for me.

I left the car back in Oshawa because i didn't want to risk damaging the engine by bringing it back to Ottawa.

We weren't sure exactly what we were going to do with it, but our options were to get it fixed or cancel the deal.

Cancelling the deal seemed like the safest answer, but it definitely would have been the most difficult and time consuming. I spent a good chunk of Monday morning trying to figure out what my rights are as a consumer (very hard to tell) and seeking advice from my lawyer colleagues.

Cancelling the deal would have had the most repercussions including the bank having a lien on the car because they gave us the loan. I was also worried about being charged with theft since i had the car in my possession (i would have returned it obviously) but cancelled the cheque.

It was all so very confusing.

In the end, i talked with my dad and Mat and we decided that the repair that needed to be done did not indicate that the car was a lemon or that it had been abused or misused. It could have happened to any car and it was probably (hopefully) just a terrible coincidence that it showed up the day i drove it away.

We decided to go ahead and get the car fixed (still hadn't heard back from the dealer at this point) and try to get the money back for the repairs from the dealer.

I know it was very hopeful and naive of me to think that the dealer would pay me back for repairs that i did to the car before giving him the opportunity for him to fix it himself, but i didn't want him to fix it anyway and if he wasn't going to reimburse me the $380 for the repairs, then i could - if i wanted to - take him to small claims court or swallow the cost and still have the car for a decent price.

When the repair was done, i called the dealer. He answered my call (!) and i started to explain everything that happened. How the misfiring started before i even got back to Oshawa, how the check engine light was on, how we tried to call him and left 3 messages, how i had to leave the car in Oshawa, how we took it to a mechanic, what was wrong with the car, and how i decided to have the car repaired. I told him it cost $380 and just as i was going to tell him that i expect him to pay for the repairs, he interrupted me and said "not a problem. Please send me the bill and i will send you a cheque for the cost."


That was not what i was expecting. I was ready for a fight and an argument. It had taken me almost 10 minutes of staring at the phone and deciding what my argument points were before i picked up the phone and called him.

He apologized and again said to fax him the bill and he would send me a cheque.

After that, it made me feel a lot better. I sincerely hope this guy is as honest as he seems and now i'm just glad to have a nice new car.

Thanks for all your support, guys. It means a lot :)
Posted by Roz at 7:29 AM No comments:

We are stronger than me

I am not a strong person, probably in any sense of the word.

I rely heavily on the people in my life to help me through most of life's situations.

Yesterday was no different.

Everything was going so well. I had done my research, i had test-driven the car, i had brought my dad out with me to ask questions, look it over and give me his opinion. And then yesterday when i picked it up, hoping just to drive it straight home, my worst nightmare was realized.

The car has problems. I called the dealer right away and told him that the check engine light was on and that the car was misfiring. He told me to bring it right back and he would look at it.

"It's just bad gas making the car misfire" he said. "I'll just put some gas line anti-freeze in to dry up the water that's causing it to misfire". He did, it ran fine and the check engine light went off.

~phew~ i thought as i drove away for the second time.

The trip back to my parent's house from the dealer was 2 hours. By the time i got home, the car was misfiring again and the check engine light was on.

Needless to say i was very upset. I felt powerless.

Over and over i asked myself "what have i just done??"

I was so upset, i knew i couldn't call the dealer again. I would not be able to stay composed. And although my Dad said he wanted me to fight my own battles, he could see how upset i was, and called the dealer for me.

There was no answer, so my dad left a message and called the dealer two more times and left messages.

My dad called his friend who is a mechanic and explained the problem. He advised us not to drive the car because you could cause further damage.

My sister was there and i asked her for a hug. A hug that i needed badly. She told me it would be ok in the end and wanted me to explain why i was so upset.

I couldn't really explain it, except for the fact that i am a very emotional person and lots of things make my upset, but i tried to explain that i felt like i had been had by this guy and that i just spent a lot of money on a lemon and i didn't know what my rights are at this point.

Can i put a hold on the cheque until this problem is resolved?
Can i take it to a dealership and have it repaired and make him cover the costs?
Can i cancel the deal based on the fact that the car is not in the same condition as when i agreed to buy it?

I'm not sure where i'm going with this, but last night i realized that by myself, as a single person, i am weak.

When i am surrounded by my supporters, my family and my friends, i have strength and i have confidence.

If it weren't for Mat's calm and reassuing attitude that when it's fixed, everything will be ok, i would be a wreck.

If it weren't for my dad's take charge attitude to talk to the dealer and get this resolved, and for his determination to gather as much information by calling people he knows, i would be lost.

If it weren't for my sister's loving and positive attitude, i would still be upset. 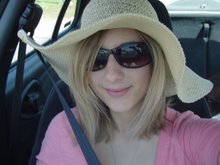